The Old Temple was designed by Swami Trigunatitananda with Joseph A. Leonard, architect, of the San Francisco and Suburban Home Building Society.

The first two stories were constructed in 1905, and in 1908 the temple was completed with the addition of the third floor and towers.

Except for the lobated arched windows of the ground floor, the first two floors, with their bowed windows and cornices above at the front, and overhanging bay windows on the side of the frame building, represent typical turn-of-the-century architecture. The main entrance, on Webster Street, is recessed behind Ionic columns which frame the covered entryway. The 112-person auditorium and various offices comprise the first floor; the second and third floors were occupied by the monastery of the Vedanta Society for many decades.

On the third floor, Moorish columns rise from a Doric base to support cusped Mogul arches forming the arcaded balcony. On the southeast corner of the building there is a crenelated European castle tower and at the northeast corner a double bulb-shaped dome on a round tower after the style of old-fashioned Bengal temples. Next along the north side is an octagonal two-stage dome adapted from the style of the Shiva temples at Dakshineswar, Bengal; beyond which is a cluster of pointed domes exactly representing in miniature a temple of Benares; and finally a dome in the style of the Taj Mahal.

The various towers, typically Indian, Mogul, and Western, are intended to symbolize the harmony of all religions and the pointed arches and domes the upward aspiration of the spiritual seeker. Rising from an unadorned clapboard base to projections of bay windows, rich cornices and overhanging balconies, the building represents a striking profile of towers, domes, and pinnacles. 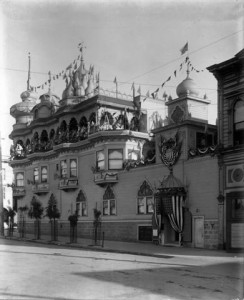